Today I had the pleasure of not only attending DDD East Anglia but also being invited to give my first conference talk - “Spot the difference: Automating visual regression testing”. For those not in the know, DDD events are free to attend, happen on a Saturday and are pretty kick ass! The organisers give up their free time to organise a great community conference and they manage to attract some amazing speakers who all give up their time to come and take part. If you haven’t checked out the DDD events yet - what are you waiting for!? DDD North is up next month!

I was informed there would be some speaker drinks planned and I also wanted to arrive in Cambridge before the event started, so chose to drive to Cambridge on the Friday - it took nearly 6 hours from Swansea. I arrived in Cambridge at 7pm on the Friday evening, checked in quickly into the Premier Inn, and then took an Uber to the Cambridge Blue. 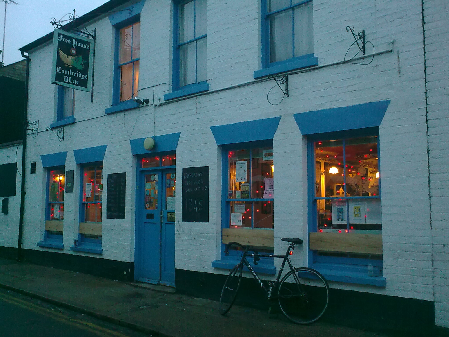 This was a really nice pub offering a massive selection of great craft beer, real ale and so much more. I wasn’t quite sure what to order as the selection was a bit overwhelming but decided to play safe and drink what most at the bar seemed to be ordering; Bit Burger draft beer - I dare not ask for a pint of Carling or Budweiser!

After many beers and speaking with the speakers I finally managed to get back to the hotel (just after 12AM) before DDD East Anglia.

The day of the event I woke 6:45am wishing I’d not had the last beer and headed for breakfast. After a short uber ride across Cambridge I arrived at the event venue in time for registration. The venue was fantastic, the event was being held at Hills Road sixth form college. The venue had plenty of space and all the track rooms were very easy to find. After being shown the speakers room and handed my awesome DDD East Anglia T-shirt I was off to my first session of the day. 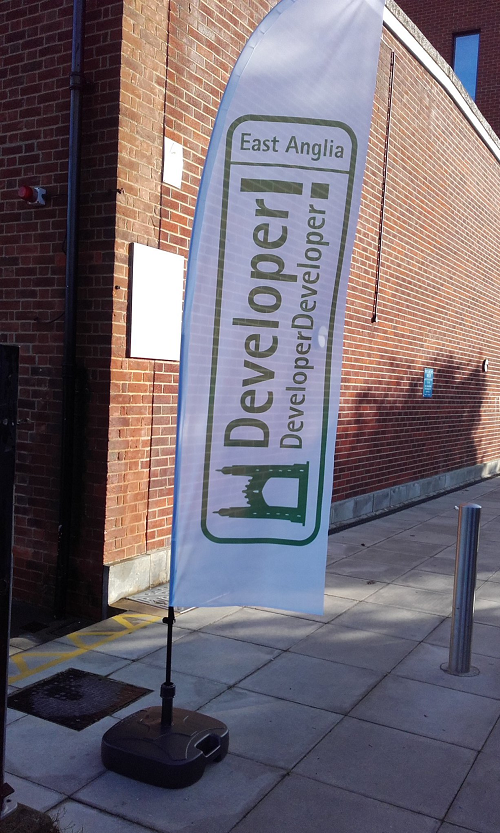 9:15 I headed to the theatre to hear Joe Stead’s talk “.Net core in the real world”. His delivery was excellent as he spoke about using .Net core at the company where he works. He touched on Rider which he uses to develop (I really want to check this out) which sounded really cool. Though the talk was around .Net core I was fascinated by the fact Joe’s company had actually paid people to build and test an open source project (NancyFx). It was a great idea in that Joe’s company got something they really needed, built and tested by a great community whilst also giving back to the community as it was open source! Joe also spoke about debuggers and how he identified an issue with the debugger when working with dates. I’d have never really thought to disagree with a debugger, you’d expect what it tells you to be pretty accurate but as Joe explained he had actually identified a bug with the debugger, this was really interesting. Joe did a great job with his talk. The theatre projector wasn’t the best and it made it difficult to read some of the code example, this was pretty much the same in the majority of rooms I went in. 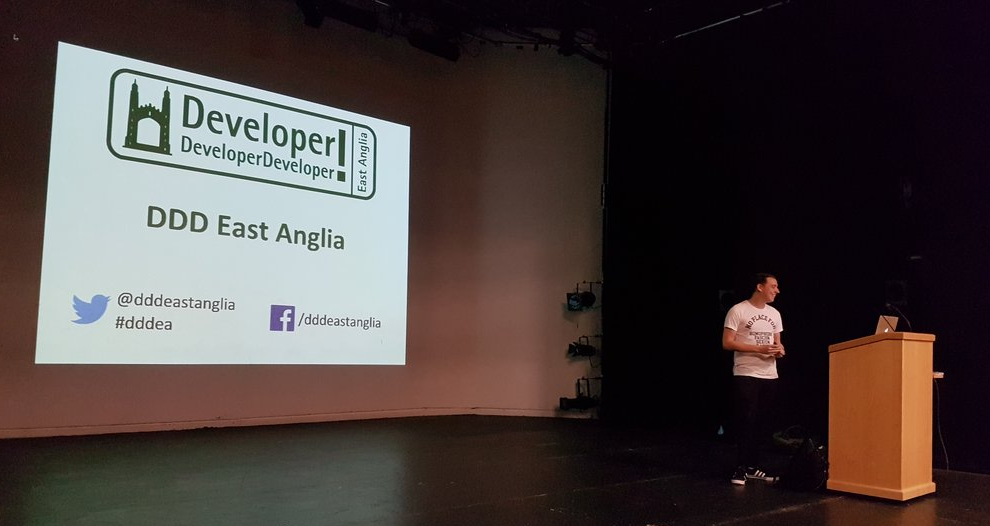 10:15 there was a break and a quick chance to grab a coffee and see some of the exhibitors before attending the next session. I skipped the next session to work on my slides for my talk in the afternoon but really liked the sound of Robin Minto’s talk “HALT! Who goes there?”.

Before the event I had agreed to help as a room monitor and so at 11:55 I became the room monitor (letting the speaker know when time was running out and collecting feedback forms from attendees) for Ian Johnson’s session “Visual note-taking workshop”. This workshop was great. Ian explained how to use caps for emphasis, neat underline and shading to make things stand out and a whole load of other things - drawing people, cats, mice, tables, a plane - it was really fun. 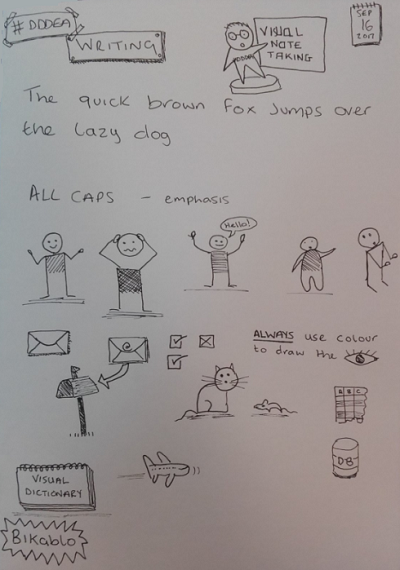 After the talk I headed for lunch which was great, there was a great choice of rolls, crisps, fruit, soft drinks, chocolate and it was also a great chance to catch up with some attendees and speakers to talk about the mornings sessions.

My talk was at 2PM but at 1:30PM I headed up to the room to ensure I could plug my laptop in as well as check that my slides displayed well on the screen and could be read from the back. Unfortunately again the projector wasn’t the best and so the text was a little blurry at the back of the room.

As 2:00PM approached the room gradually began to fill up. I set my timer on my watch and at 2:00PM I started - I’m so glad I used the timer as the first few slides I rushed through …. after a few slides had passed I glanced at the time and noticed I was speaking a little fast and rushing due to being nervous and so I quickly adjusted my delivery and slowed down (revisiting some previous slides to further explain things I’d rushed over previously). The attendees were fantastic, they asked some great questions and all got involved in the various interactive tasks I set out - spot the difference and then Where’s Wally. 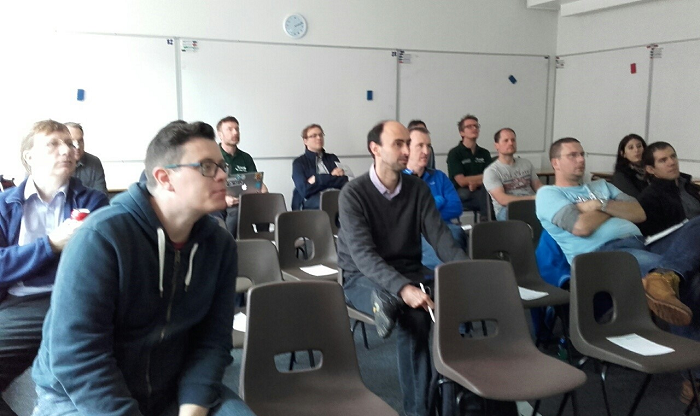 The group seemed to have fun and I had a great time presenting and I plan to deliver the talk a few more times at some meet-ups as I have also now been selected to give the same talk at DDD North in Bradford next month!

One real plus from being able to deliver this walk was some of the ideas and feedback I had from questions and discussions with attendees. 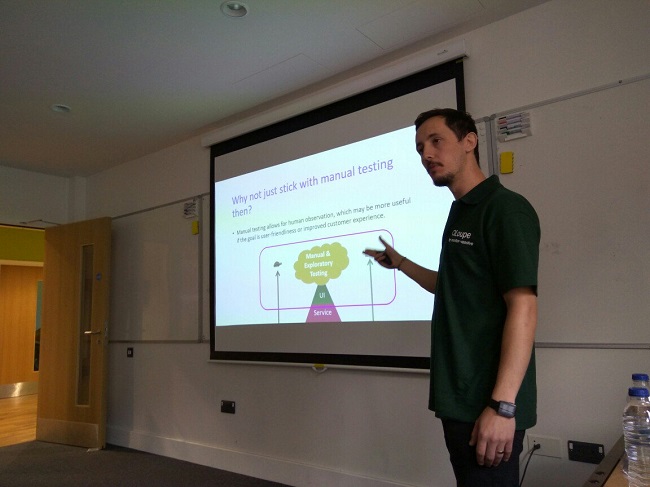 I was so pleased after the event to receive a tweet from the very talented Magda Figuerola (@MagdaFiguerola), she has captured my talk in a fantastic sketchnote. 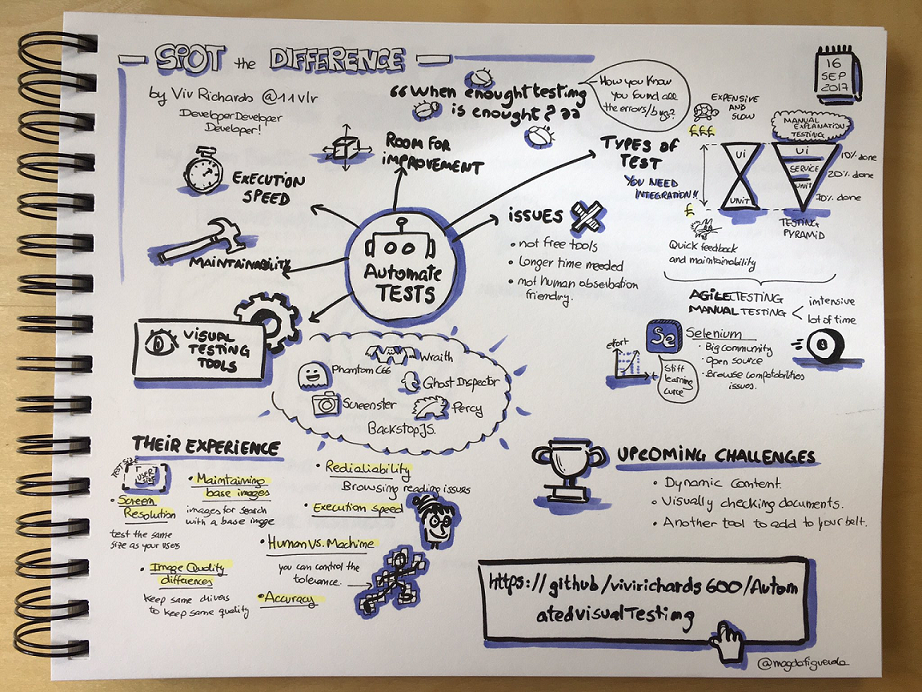 After my talk I unfortunately had to make a quick exit due to the drive home being really long. There were still some great talks in the afternoon and a prize draw but sadly I had to miss these.